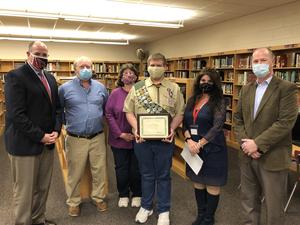 Jacob Speedy has successfully completed his Board of Review, making him the sixth scout in his troop to earn Eagle Scout's rank for the year.

Jacob has been involved in scouting for ten years.  He started in the Cub Scout pack 101 in Saltsburg, and he moved up the ranks and has become the last standing scout from his original pack.  Jacob then joined the scouting troop 1029 of Indiana, becoming a Brother in the Order of the Arrow.  In order for Jacob to achieve the rank of Eagle Scout, a service project is required. For his project, he created a set of three park benches for the Saltsburg community pool. They are made of recycled plastic lumber and stainless steel fasteners.  On December 17, 2020, he successfully completed his Board of Review, making him the sixth scout in his troop to earn the rank of Eagle Scout for the year. Though he has aged out as a scout, he is still active in his troop as a leader. Although Jacob is undecided on his future plans, he comments that the Boy Scouts have provided him with many skills and talents to maneuver whatever lies in the road ahead.

In school, Jacob has been involved in the band and yearbook.